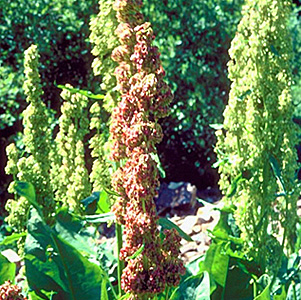 Often considered a weed by the average homeowner, Western Dock is actually a worthy native food with edible greens, stalks, and seeds.

Western Dock is a perennial herb with edible leaves, stalks, and seeds.  Young spring leaves are most tender and mild, and can be eaten raw or cooked like spinach.  Older leaves can have a bitter taste, and if so, can be boiled in a change of water.  Later in spring, young flower stalks can be eaten like rhubarb or celery - best peeled and cooked.  Once the seeds turn red-brown in late summer, they can be eaten raw or cooked - they are best ground and mixed with other heavy flours.  Gluten free.

Curly Dock, a closely related species, has been shown to have leaves that are high in vitamin, C vitamin A, and iron, and seeds rich in calcium and fiber while low in protein and fat.  Docks also have myriad medicinal uses, from a potentially reducing Common Nettle stings to detoxifying the liver and soothing skin issues.

NOTE:  Along with hundreds of other plants (including common vegetables like lettuce, spinach, chard and beets) Western Dock contains some oxalic acid - a natural compound that, in large quantities, can have negative effects.  One should not eat extreme amounts of these foods, especially raw, and especially if they already have kidney stones, gout, arthritis, or hyperacidity.

Western Dock has green, sometimes wavy, rounded to lance-shaped leaves with red veins and a red hue developing, especially on older leaves.  Leaves form a rosette in spring, before emergence of one or more green to red flower stalks to a height of 24-36 inches.  Seeds begin green as well, but change to yellow, red, sometimes pink, and ultimately brown and dry.  Over the seasons, Western Dock can add color, texture, and interest to any border or flower garden.  Seed heads look good next to native grasses like Wild Rye and Northwest Territory Sedge.

Western Dock is most commonly found in wet meadows or wetlands throughout its range, but can also make its way into drier areas.  A resilient and hardy plant that spreads successfully from seed, it can also be found in gardens and abandoned lots in suburbs and cities across our region.  The large seed heads are important food for birds and waterfowl.  Western Dock can be found growing alongside other wetland wildflowers like Great and Common Camas.

Harvest leaves as soon as they emerge in spring for tender salad greens.  As leaves grow bigger, add to soups or serve as cooked greens along with Nettle and Waterleaf.

Stalks can be harvested as soon as they appear, but only harvested once if one desires to get a seed harvest.  Stalks can be peeled and cooked like asparagus alongside other vegetables.

Seed heads can be easily stripped from the plant once reddish-brown and dried and ground in a blender to a fine flour.  It can be mixed with other heavier flours like acorn flours to add lightness and texture.  Try Dock/Acorn crackers binded with Cattail rhizome starch, in the dehydrator or oven.

These plants arrived at my home in Minnesota in perfect condition. I was really impressed at the level of fore-thought that went into packaging these plants for shipment of such a long distance, hence their arrival in such great condition. They are happy and healthy and in the Minnesota dirt! Guess the rest is on me. :) Thanks, folks at Native Foods Nursery, and great work!