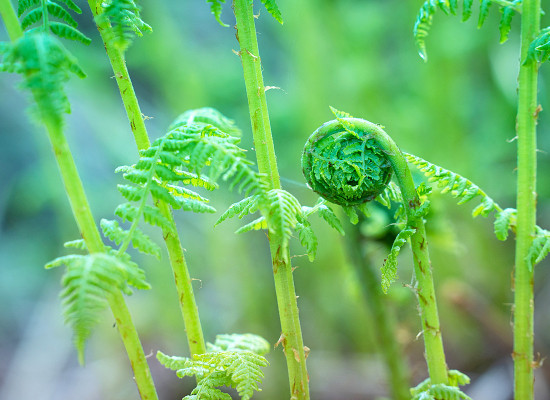 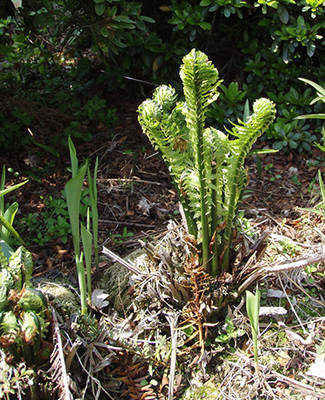 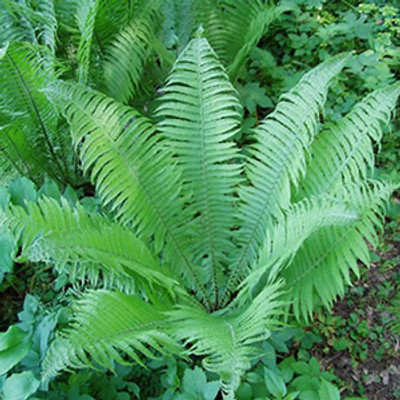 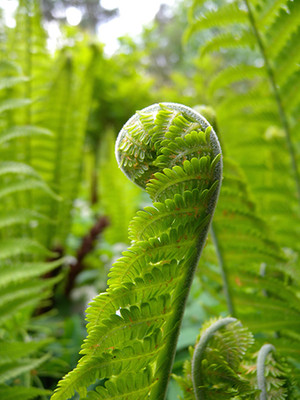 Fiddlehead Fern, or Ostrich Fern, is a large, graceful fern native to the northern part of the Northwest region.

Fiddlehead Fern is a native food well-known world-wide for its crisp and delicious young fiddleheads, reminiscent of asparagus or green bean when cooked. These fiddleheads are high in important vitamins and minerals (Vitamin A & C, Carotene A & B, potassium, iron) and even contain antioxidant compounds, essential fatty acids, and dietary fiber.  Lesser known, it also has an edible rootstock, which can be peeled and roasted (although this kills the plant).

***Fiddleheads must be cooked before consumption to neutralize a harmful enzyme (see preparation below). They are often steamed or boiled, and then sauteed - and can be canned for later use.  This food remains an important indigenous food source and is popular in cultures around the world.

Fiddlehead Fern, or Ostrich Fern, has strong ornamental qualities. Its' large and numerous fronds brings lush green color and eye-catching textures - acting as a groundcover or border plant in shady garden areas. In fact, it has received the Royal Horiticultural Society’s “Award of Merit” for its' strong ornamental value. It grows well under the thick shade of conifers, or on the north side of homes, but can also be planted underneath Saskatoon Serviceberry, Pacific Crab Apple, or even Oregon White Oak.

Summer sun and heat or excessive wind can shred and brown the leaves prematurely; plant in a somewhat protected area. Leaves brown naturally and the ferns go dormant by Fall.

Fiddlehead Fern is distributed in temperate regions throughout the globe, but is only native to Northern parts of Western North America, and is relatively uncommon here. It is found in moist and shady areas along streams and river banks growing alongside other ferns like Spreading Wood Fern or groundcovers like Redwood Sorrel and Pacific Waterleaf. It spreads by stolons, eventually creating colonies, providing seasonal cover for birds and other wildlife.

Northwest Native American tribes today still value this special plant as food, medicine, and family.  Despite great cultural losses, they continue to work towards stewarding and restoring wild populations, both strengthening the integrity of the ecology and sustaining their cultural heritage and wisdom.  These strong and recovering peoples and plants deserve our respect, gratitude, and reparations. (Learn more & how to help on our Charitable Giving page.)

Harvest of fiddleheads begins in early Spring in the Northwest, as soon as the curled, green heads begin to emerge from the previous year’s rootstock. Be attentive - it doesn’t take too long for them to grow above 6 inches (at which point they aren’t as tender). Only harvest heads that are still tightly coiled, and only harvest half of heads from any one plant to ensure overall plant health. They can be cut with a knife or snapped off with using your fingers.

Once harvested, remove papery brown sheath with fingers, wash, and then steam or boil for a full 15 minutes (this is important). Discard water. Then, they can be prepared in any way one might eat asparagus. They can be sauteed, stir-fried, or served with melted butter and salt, or even lemon juice and garlic. Mmmmm! Enjoy!

I love these plants but they are hard to find. Luckily Native Food nursey had them available. I don't plan on eating my and instead will just enjoy admiring them.

I've been wanting to grow Fiddlehead Fern and found them from this nursery, so I'm happy with my purchase.

These healthy plants are doing great on the north side of my house. This is their second year and they continue to shoot up (even through the weeds) .